This post contains affiliate links for baking accouterments. I either own said linked accouterment or I intend to buy it as soon as the old one dies. A kitchen scale

and an oven thermometer

will simplify your baking life well beyond their minimal cost.  Real pastry bags

There’s a lot of mystery and drama surrounding macarons.

And honestly, it’s with good reason. Crunchy, creamy, cakey, soft, sweet, gluten-freaking-free. It’s like they’re not even of this world …

A while back, a friend brought them to a dinner party and the way she said, “I made them, no … I mean it, I can make macarons …” Got my attention.

Because you know, if she can …

Anyway, fast forward to when I started seriously binging on the Great British Baking Show (9/2017) and my assessment was confirmed. This sublime, mysterious, delectable, captivating French cookie had never warranted its own episode. These highly skilled amateur British bakers were using macarons as a garnish, as fluff, as filler, and not the main event! Sooooo ….. How hard could making macarons be?

Yes, exactly. Not that hard.

And another thing … America’s dedication to volume measurements for dry ingredients is as inaccurate as you/I have always suspected. Get a scale

. You are making a breathtakingly delectable dessert; you are worthy of this small investment.

Chemistry depends on a certain amount of molecules being exposed to a certain amount of other molecules (proteins, sugars, enzymes, etc.) at a certain temperature. The chemistry of macarons is particularly dependent on these factors. If your oven temperature is unreliable, it will unnecessarily complicate things. You can’t “350°F this for an hour, give or take” like a casserole. Get an oven thermometer

For the anatomy of a good macaron, click here. For a concise summary of what does and doesn’t matter when making macarons, read this and for 50(!) different macaron flavor recipes click here. 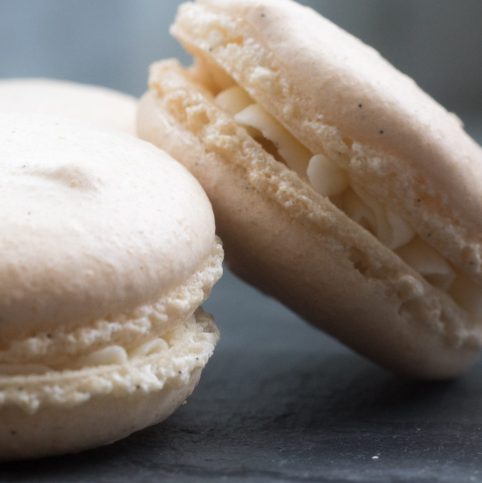 For the Macaron Shells

For the Equipment, Ingredient, and Kitchen Prep.

For the Egg White Mixture

Combine the Meringue and the Dry Ingredients

Bake and Cool Them

finely ground almond flour* Follow this link for an explanation of almond meal, almond flour, blanched, unblanched, etc. You can make your own almond flour simply by blitzing almonds in a food processor just short of turning them into almond butter. I use Bob's Red Mill Finely Ground Almond Meal/Flour from blanched almonds. It makes a smoother cookie and it's easier to weigh/sift since there are no almond skins and hence, fewer "almond balls" during the sifting process. Egg whites* I could be crazy, but I think eggs separate more easily when they are cold, so now I do this step early in the process. I don't think it matters one bit whether or not the eggs are old. (Old eggs have less water which some people say makes better meringue.) If you are going to pay attention to your eggs at all, put that energy into using local organic ones.  Glass bowl* Don't use plastic (it harbors oils) or aluminum (it releases flecks of metal) bowls. Both those can interfere with how well the protein molecules in the egg whites unfold. Cut a hole*/piping tip* The garbage disposal ate my macaron piping tip, and that's when I learned it's easier to fill a bag and cut a hole.

Need something more streamlined you can knock out for tonight? Try these brownie cookies. Looking for a vintage (read my mom’s) brownie recipe? Bake these.