Big, fat, soft, sweet, with a warm gooey heart …  these cinnamon rolls are everything you expect in a homemade-with-love calorie bomb/nutritional fail.

But … they are sooooo worth it.

They are inspired by the cinnamon roll recipe in the 1986 edition of the “Betty Crocker Cookbook”. Thank you, Betty, you’re the best.

Way back in the early 1990’s – when people still had bake sales  Betty’s cinnamon rolls were best sellers. I made a practice run at home and realized that while Betty had the dough down, she had nowhere near enough cinnamon, sugar, and butter for the innards. Cinnabon was very popular way back then and I knew my buns had to at least come close to their zenith product. Here it is.

You will not be disappointed. 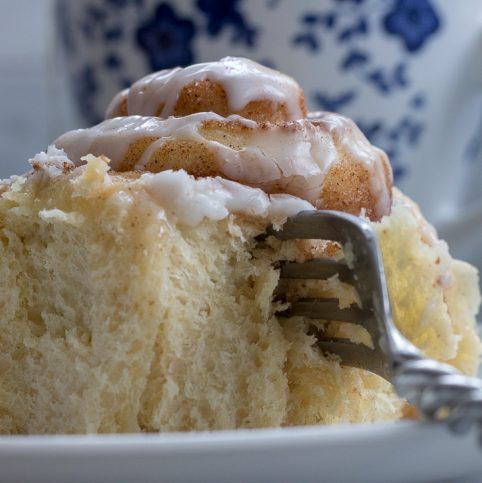 Burntporkchops.com
Accept the challenge of making a sweet dough that needs time to rise, then jump in and do it. Just make that dough. Roll it out, butter it, put massive amounts of sugar and cinnamon on it, roll it into a cylinder, cut the buns and bake them. Drizzle icing on them. Dang. Perfection.
Print Recipe Pin Recipe
Prep Time 2 hrs 25 mins
Cook Time 25 mins
Total Time 2 hrs 50 mins
Course Breakfast, Dessert, Snack
Cuisine American
Servings 10

Use warm water for the yeast - not hot. No need to measure the temperature. If the water feels comfortably warm - like what is good for a baby bottle or toddler's sippy cup, it's fine.