Cauliflower, kale, and turmeric are still having a moment in American Food trends. And all with good reason.

All cruciferous veggies (cauliflower, cabbage, garden cress, bok choy, broccoli, broccoli sprouts, and Brussels sprouts) are packed with busy, very important molecules. But don’t take my word or your mother’s word for it, take Dr. Google and Dr. Rhonda Patrick’s word for it.

I admit to listening to this podcast by fast-talking biochemist researcher Dr. Rhonda Patrick more than once. It’s a deep-in-the-weeds information-packed discussion about emerging research on compounds in cruciferous veggies. The bottom line is Dr. Patrick is very excited about cruciferous veggies and will have you mentally plotting ways to get more of them into your diet.

If you need more nerdy stuff, Science Daily has this to say about our friends the cruciferous veggies.

Kale’s 15 minutes of fame is over.

But how wonderful is it that Kale even had its 15 minutes? Kale has a lot going for it and throwing a handful in this soup is frankly, one of the simplest ways to consume it. It’s a no-brainer. If kale freaks you out, leave it out of the soup. If you’re in the you literally are, molecule for molecule, what you eat camp, put in as much kale as you can tolerate.

Is Wild Rice a seed or a grain?

Honestly, I’m 20 minutes into a Google search and still don’t really know. But, it seems the people who are against white rice are OK with black rice.

I think wild rice is the seed of a grass and that grass would be classified as a grain. But since wild rice is the whole seed and not processed, meaning outer layer (bran) is still intact, it’s good for you. It takes longer to cook and sort of puffs/breaks open when done. It will not lose it’s bouncy, chewy texture which adds a satisfying mouthfeel because it makes the soup chewable. That’s important for those of you who don’t feel full unless you get to chew. Nutritionally speaking, wild rice has a number of pluses like more fiber and protein than white or brown rice.

Sometimes they hide black rice in grocery stores. It comes in small boxes on a not eye level shelf. It’s pricier than white rice, but a little goes a long way. Seriously, a half cup does this whole soup.

There’s tons of research, information, and turmeric supplements out there. But really; just use the spice and use it often. It’s freaking gorgeous and has a warm, earthy flavor. It can turn everything yellow, which is why you add it after using the immersion blender in this recipe. I am not saying eating this nutritional powerhouse of a soup is going to undo the damage from eating my Big Fat Cinnamon rolls. (If there even is damage, because cinnamon, is really good for you, too. LOL!)

I am saying eat way more veggies than you do anything else and get the good stuff from plants by eating actual plants. Not plants that have been somehow squeezed into a shelf-stable thing in a bottle.

As for the flavor of the soup, it’s good. If you are afraid of turmeric and kale here’s a little encouragement: my chicken-strip-and-fries only grown son likes the recipe.

Part of the pleasure of cooking is using good equipment.

I love my Le Creuset pot

and look for recipes where I can use it. I love the heft, the way foods sear, they way the cast iron retains heat and the way it cleans up. I even love the way the handles get hot. It’s a more … immersive experience.

About the heavy part …

I think that loosely translates into being able to lift your own suitcase into the overhead compartment. Whaaaa?

Trust me on this: I am in the fall of my life. If you don’t find a way to keep doing normal things you will slowly end up arranging your life to avoid doing things that should be normal. So if you don’t have a heavy pot, at least get to the gym often enough to be able to lift a heavy pot.

Just in case you decide to buy one. 😀

I’ve had a Braun immersion blender

This post contains affiliate links and purchasing through them helps support BurntPorkChops. It’s not that I want to quit my day job … but if this blog ever takes off … 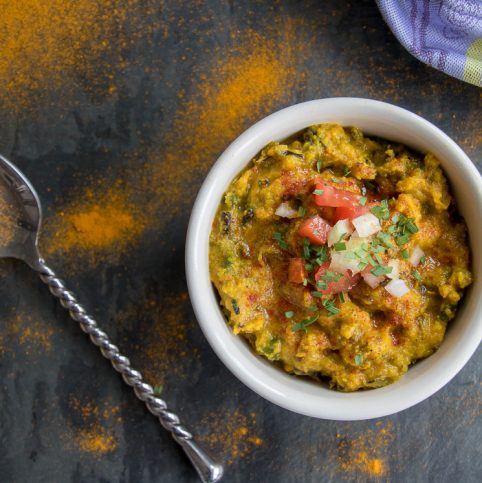 This is a thick soup. You can adjust the consistency with more or less vegetable broth/water. Like many meals-in-a-pot, the flavor develops over time and it gets better and better.  Try smearing it on a tortilla with some cheddar or Mexican Oaxaca cheese (or both) and spicy salsa - makes a delightful fusion meal.